Schneider Electric, leader in the digital transformation of energy management and automation, reopened its Dutch head office in Amsterdam Airport City in May 2022 after an extensive renovation. Thanks to the innovative and sustainable adaptions, it has become one of Schneider Electric’s global flagship offices.

‘Sustainability is the flag on top of our roof,’ says Debby Slofstra, Country President the Netherlands at Schneider Electric, proudly. The French multinational, that has been named ‘the most sustainable company in the world’ by Corporate Knights last year, has chosen Hoofddorp to once again be the location for its Dutch head office. After reviewing their location, the decision was clear. ‘Hoofddorp has great public transport options, including the train station and nearby Schiphol Airport, and people who live in the area can come to work by bicycle. Moreover, we were able to turn this building into a flagship office for all our staff,’ Slofstra explains.

Another real advantage of the location is that a majority of the employees live in the Amsterdam Airport City area. Pim Loef, Sustainability Leader at Schneider Electric says, ‘many colleagues come from The Hague, Utrecht but also from province of North-Holland. Hoofddorp is a perfect spot. It isn’t only easy to reach by car but also via public transport.’

COVID-19 speeded up the journey we had already embarked on

Sustainability has been part of Schneider Electric’s DNA ever since the company moved from Haarlem to Hoofddorp at the end of 2012. Even back then, the building had the most advanced BREEAM certificates in the Netherlands. Before converting the building into a flagship office with a more healthy, efficient, and flexible working environment, Schneider Electrics initiated a pilot project at the start of 2019. Slofstra explains:

‘We installed sensor solutions in the office to collect data about the air quality, CO2 levels, temperature, and ventilation. When the pandemic struck the world, we were forced to move to new ways of working. We had already made the necessary preparations for remote working from an IT perspective. The data from the pilot project showed us how the office was being used when it was fully occupied and during the pandemic. It opened our eyes and gave us valuable input for the renovation. Our company decided to reduce to about 50% of the office space, while keeping the same number of employees. So COVID-19 speeded up the journey we had already embarked on.’

In the renovated Dutch head office, Schneider Electric integrates many of its own technologies: from sensor solutions to energy monitoring and from building management to Electric Vehicle chargers. Loef adds, ‘our policy is that colleagues work from the office around two or three days a week, and that on the other days, they work from home or a different location. The office is mainly to meet each other and to have conversations with other colleagues or to host events and informal discussions. I think that’s an advantage.’ 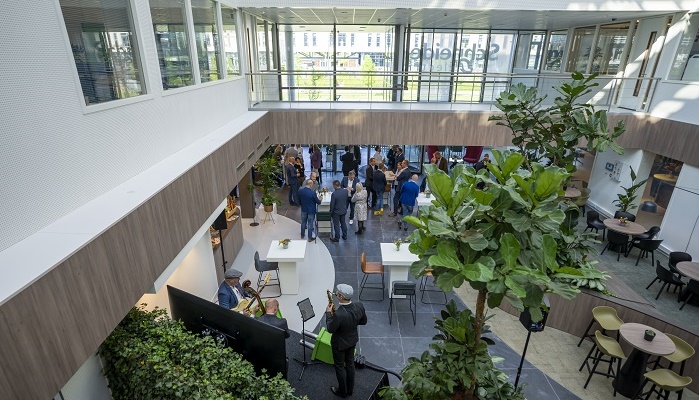 Multinationals have an obligation when it comes to educating people

Many universities of applied sciences and academic universities are within half-an-hour’s travel of Amsterdam Airport City. ‘That really helps us getting international people on board. We’re trying to recruit lots of young people from the Delft University of Technology and University of Applied Sciences Utrecht. Our company is active in 100 countries, so we employ expats from all over the world,’ says Slofstra. But Schneider Electric isn’t the only company on the hunt for talent, their competitors are, too. ‘The hunt for talent is on in lots of Western European countries. There’s a shortage, especially in hands-on technical people.’

For this reason, the multinational is investing in e.g. TechnoHUB in Woerden to support technical education. At the University of Applied Sciences Utrecht, Schneider Electric helps students to earn their  bachelor’s degree and supports the educational institution with knowledge and teaching. For five years, the company has also been offering a technical traineeship for young professionals. According to a determined Slofstra, ‘I actually joined Schneider Electric almost five years ago because I truly believe that multinationals have an obligation when it comes to sustainability and educating people.’

Collectively, we can do so much more

Cooperating with other local partners is another priority of Schneider Electric. ‘We collaborate, for example, with Bluewater, Dura Vermeer, Schiphol Airport, and data centres in the region. Our company sells via distribution partners or dedicated partners in power monitoring, building management systems, panel builders, machine builders, etc. That's why we feel so strongly about working together. Collectively, we can do so much more,’ emphasises Slofstra.

The company’s sustainability goals are ambitious. ‘We want to be net-zero in 2050, without any offsets,’ says Loef. ‘This means we have to not only take a closer look at our own company but also at our partners’ and our supply chain partners’. It requires us as a company to do our business locally. We’ve recently started an initiative together with The Farm Kitchen, an organisation that provides local food grown on the healthy, nutritious soil of farmers from the region. But we’re also increasingly seeking out partnerships with other businesses, so we can become more sustainable ourselves and reach our goals and help others do the same. For the future, we’re working on a more localised approach, where you’ll have the possibility to connect different applications and different buildings in the grid to share energy between the different users.’

Slofstra is very optimistic about the business opportunities at Amsterdam Airport City: ‘We believe that with our hardware and software solutions, we're heading for an answer to the two most important and biggest global changes: electrification and digitalisation. When you combine these two in the right way, you create sustainability.’